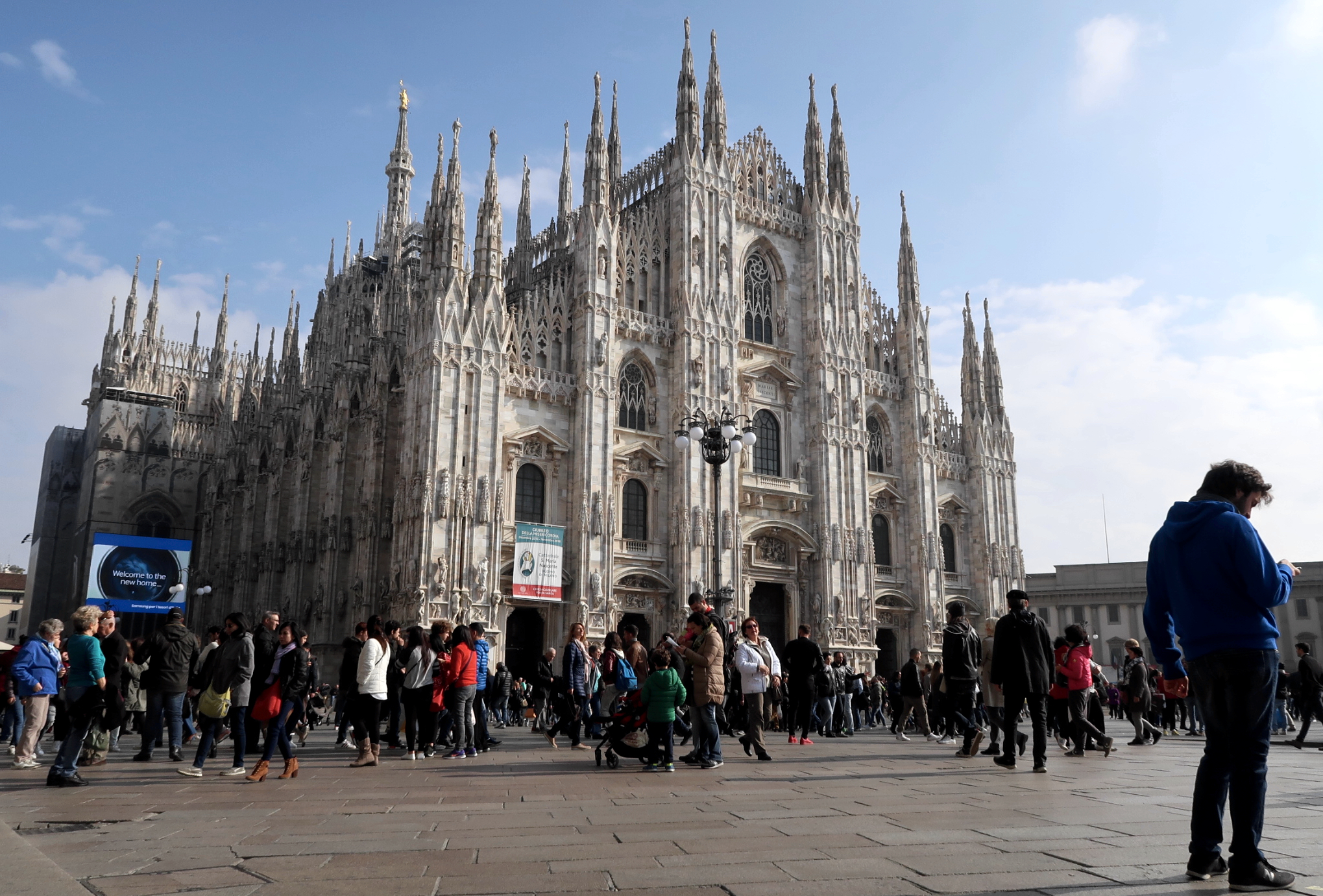 A quick citytrip squeezed in between two island road trips. Milan has a lot to offer, or so we heard. Time to check it out!

We leave very early, taking into account it is Saturday. Never taken a train during the work week around 5.30 am … I’m still recovering from a cold, and a little bit afraid of the effect on my ears during the flight. Some (for me) heavy medication brings rescue, and around 10 o’clock we arrive at Milan Malpensa Airport. We bought our bus tickets on the plane. We had forgotten this service by Ryanair, and although you wouldn’t think, it actually is a lot cheaper to buy your ticket with them: € 28 instead of € 40 for a round-trip for 2! Around 11.15 am we arrive at the central railway station (Stazione Centrale) and we can start to explore Milan. The railway station is very bombastic and big. It breaths an atmosphere, like we are in the Mussolini era (we don’t know this for sure of course, luckily we are too young!). It was opened in 1931, so I don’t think we are too wrong about this. After a quick lunch in front of the station, we buy our two day-passes for the public transport (€ 16,8 for 2) and head for the UniCredit tower. The area around the tower is very modern, with lots of new buildings. The tower itself reminds us of the Burj Khalifa in Dubai, and the appartement blocks with hanging gardens remind us of similar towers in Sydney. By the way: the Pirelli Tower at the railway station is not really interesting.

After this modern passage, we go to the cemetery. Like in every big city in the world, the cemetery is worthwile going, although it is a little bit lugubrious. But if you like some silence, it is the place to be. The Cimitero Monumentale sure has the right name! It really is monumental! The graves fight for your attention. Big, bigger, biggest and ornamented, very ornamented or heavily ornamented. Everybody will find something to his liking! After this intermezzo of silence we trow ourselves back in the busy city center.

The Dom (cathedral) is the center piece of the Milanese monuments. It is the fourth biggest church of Europe. But the queue is endless, the ticket prices are not that cheap, and it’s already afternoon. So we enjoy some people watching at the square (Piazza del Duomo), in a lovely Indian summer sun. Along the Galleria Vittorio, we head to the Teatro alla Scala and walk to a park just across the Guardinni Publicci. The metro takes us to a very hip and supercheap falafel place, and by the time we finish our dinner, the sun sets and we search for our hotel (this is Biocity, just outside the city center).

Today we want to explore every stone of the center. We will have to walk alot outside, since a lot of musea are quite expensive. On the other hand, how else to see a city? But it’s raining … We take the subway to one of the farthest points: the Navigli area, with her canals (like in Venice) and the old harbour Darsena. The Porta Ticinese can also be found here. Check. Next on our list is the Last Supper by da Vinci. Needless to say, but this painting is on the World Heritage List. We didn’t buy tickets beforehand (too expensive). The normal entrance fee is € 6,5, at the counter € 12.

Well, we did see the church where this masterpiece is hidden: the Santa Maria della Grazie. But although we don’t notice a lot of people walking in that church, all tickets are booked until next week (!). This will be the closest we get to the Last Supper. In the same area, the Museo della Scienza e della Tecnica houses the installations of da Vinci. But today is Sunday, like every where else in the world, children don’t go to school on Sundays. And it is raining. Meaning this museum is full of very excited and bawling kids. If we have to pay € 10 each, we want to enjoy the museum in peace. Change of plans it is.

Except for churches and windowshopping, there isn’t much to see in a raining city. Another look at the map and travel guide teaches us the Castello Sforzesco should be open. If so, we would at least see one masterpiece today: the last pieta of Michelangelo: the Pieta Rondanini. And yes indeed, this museum (which once was a castle) is open and reasonably priced. For only € 5 we have entrance to all the wings and exhibits. There are a lot! Ranging from ancient art, over Egyptian to classic art. It can all be found here. And it is dry and warm 🙂 We safe the best for last: Michelangelo’s pieta. Nicely highlighted in a closed room. This is, strangely enough, also the only place where we can take pictures without having to fear the fury of the museum keepers. Although never completed, or perhaps because of that, it is a special piece! Luckily there is a plaque with an explanation, or we’d never seen it represents a mother and son. By the time we have finished this huge museum, it stopped raining and we decide to have a look at the shops (Corso Buenos Aires is a must if you’re here …) and have dinner at the same place like yesterday. This day failed a bit, but we still got the most out of it!

On the third and last day of this Milan trip, we – again – look for some calmer places. Apparently nobody is interested in visiting the tombes of Verdi and his wife. The Casa Verdi houses musicians, but Verdi never lived here. He did build the place to host his friends. We combine this with a visit at the City Life Project. A new quarter, but still in the construction phase. When it will be finished some day, it will be well worth to take the long subway trip down here though. We head back to the city centre. It is Monday, and like in our home town, a lot of musea are closed today. So we have to be a bit creative. We visit some churches we didn’t see yesterday. One of them is the Berdardino alla Ossa. The Sant Stefano Maggiore is just next to it. It stays a mystery why so many churches in Southern Europe are built out of bones and skulls. Special but freaky. Around midday we try a kind of folded pizza at Luigi’s. For once, our travel guide has it right: long queues, but they clearly are well prepared to handle the crowd. After some extra pictures from the Galleria Vittorio, we take a metro to the Central Station (our 48-hour ticket is still valable, although we passed the 48-hour mark) and catch the bus back to the airport. We are in the front row, which is a good place if you’re interested in the remarkable driving style of Italian drivers …

Milan was nice, although we didn’t see everything. The Civico Museo Archeologico, the Biblioteca Ambrosiana, the Palazzo di Brera or the Hangar Bicocca and the Grattacielo Pirelli are still on our list 🙂

the 360 view of the Galleria Vittorio: