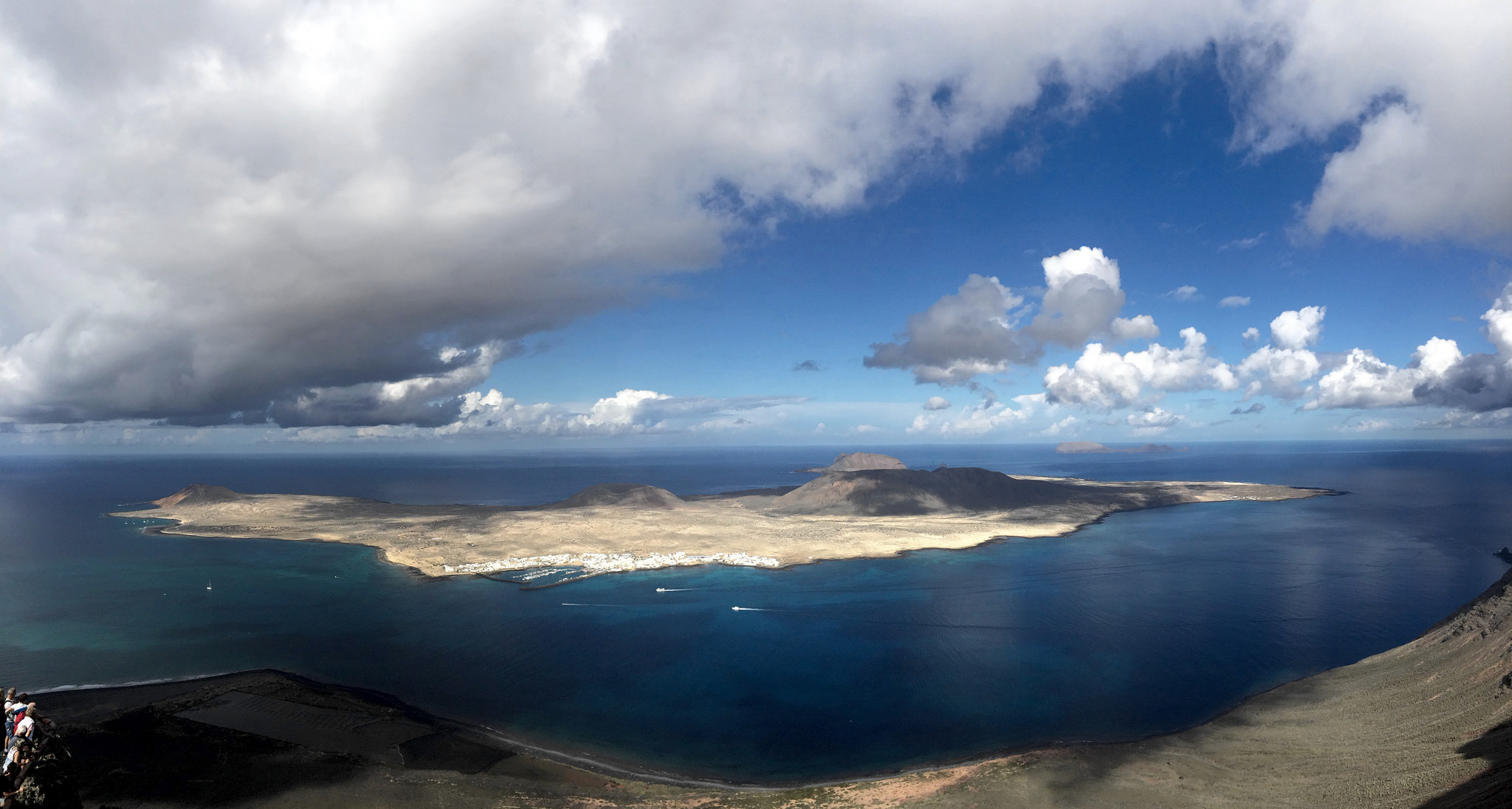 Our first day at this island in the Atlantic Ocean consists of waiting. It started of course back home: waiting for the bus to the airport of Brussels South, waiting for the plane and waiting on the stairs to finally get in. And than in Lanzarote looking (rather searching) for the rental car company (if you hire a car via Sixt don’t expect to see a counter of Sixt: they work with a local company Top Car Reisen) and waiting for at least half an hour at the reception of the hotel to get checked in (no, the queue before us wasn’t that long: just two people). But we still saw the sunset, and we had dinner outside! (we were so clever to book the first night at a hotel just 5km from the airport, since we arrived at night). Tonight we sleep at a resort-style hotel, in the south of the island, at Playa Blanca. Although this isn’t really our style of travelling, we think it still is a good spot to explore the direct surroundings and travel further up north later in the week. Our first stop of the day is Puerto Calero. We read this is the biggest harbour of Lanzarote, but we have to search very hard to find it. Once arrived there isn’t really that much to see, although the fishes swimming in the crystal clear water are beautiful.

Our next stop is more to our likings: Punto del Papagayo. We have to drive off road, not a problem for us, we are used to far worse roads than this, but our car isn’t 4×4 so we drive easy. We pay three euro entrance fee, but it is worth the money. There are four beaches, but more spectacular are the rocks around. The view from high up is very nice. Once the clouds come in (and the temperature starts to drop) we drive to Playa Blanca, our sleeping place for the next days. Before we head to the hotel, we stop at the lighthouse.

Not that spectacular, rather surreal: the road and houses were once constructed but never finished. This ‘once’ must lay many many years behind us … The hotel is another bummer: looking fancy from the outside, but we’ve been sleeping at for more comfortable camping sites! We’ll have to deal with this. We’re outside people, so we won’t spend that much time inside our room after all.

The next day starts with rain, like it ended the previous day. We decide to change our plans and drive to Yaiza first. By the time we get there, the sun starts to break through the clouds. According to the travel guide, Yaiza is the cleanest village of Spain. It’s a nice village indeed, but we don’t notice anything exceptio nal. We drive further north, to the area La Geria. This is the agricultural heaven of Lanzarote.

Not only for fruit and vegetables, but more important for wine. This area has a lot of wine houses. We are not interested in this, but it is quite spectacular to see how the people of Lanzarote deal with the elements in a creative manner: digging holes, planting in the holes, covering the seeds with black sand and building a wall around the hole is the recipe for

harvesting success and transforms this already bizarre landscape in something unique. The black sand is necessary in summer but at this moment we don’t see why it is useful: the clouds have won the game of the sun … So of we go to the nature park Timanfaya. Lanzarote is a volcanic island. We drive along lava fields, thousands years old, and extincted volcanoes. The landscape truly is spectacular! It appears there is a board walk at the visitor centre of the Timanfaya Park from where we can see the lava fields of the park itself. These are more dense than the ones we passed along the road. We enjoy the views and the sunshine (again) for over an hour (!) and than head back to the road towards Montañas del Fuego.

The Mountains will stay a mystery to us, since it costs nine euro per person to enter this part of the park, and there is a queue of over an hour to drive in. The walks are all fully booked, so we cannot enter the park.

We don’t bother and drive further to the next spot: the park is also accessible by camel … We leave this spectacle for the tourists, and drive to the coast line.

The Salines de Janubio is our first stop. This salt mine appears to be constructed in the 19th century and is an important breeding and resting place for birds because of its unique location.It also is of cultural importance to the inhabitants of Lanzarote.

For these reasons the Salines are on the World Heritage List. The information plaque tells us this is one of the biggest salt mines in the world, which we think is unlikely but it still is very beautiful and we buy some (really cheap) local salt. We follow the road to El Golfo.

The view is phenomenal! So is the beach of El Golfo. We find the crater lake by coincidence and because of the reflection of the sunlight the green colour of the lake is just beautiful. And so is the contrast with the blue water and the black sand! We drive back to Los Hervideros. Mother Nature at best! We find (a little bit of) Australia in Europe! While the busses drop the tourists en masse, we enjoy an upcoming storm at sea – which passes the coastline on inches, but the sun wins this game easily! By the time we get to the beach of Janubio, the storm has evaporated and we enjoy the sun till dark! On our sixth wedding anniversary we decide to drive some more kilometers. From the south of the island, all the way to the north: a full 60K!! On the way to the Mirador del Rio, we stop at the Monumento del Campesino – build by Marique Cesar (responsible for most of the typical architecture on the island). It’s a must-see, although we think it is awful. Next are the lava tubes.

I really want to see this, after all, we did let this pass in Australia. But the entrance price and the busses with tourists hold us back. The lava field around the Jameos del Agua is spectacular enough and free (Jameos is nine euro per person, or combined with the Mirador and the Cueva de los Verde twenty euro). We decide to go directly to the Mirador (look-out). For only € 4,5 per person we go up and have a nice view over the small island La Graciosa.

This would make for a perfect day-trip if we’d be here longer. It seems like there only life a handful people, surrounded by tons of sand. After an hour we drive back south, passing Haria. It’s market day but we don’t find a parking spot in the small streets. Since the dark clouds are coming closer again, we drive to the other side of the island – from West ot East to the the Blue House in Arrieta. This blue house thing is a bit over the top; yes, the house is blue. And red. But nothing special to be blown away …

We try to find a spot to eat our lunch, and end up at the terraces of Tabayesco. The small mountain road requires our full attention, and we are very happy to see a big bus driving the same direction as we.

After some very narrow curves, the road finally opens and we stop at a bulb. We suppose it has a meteorologic purpose. The turbines of Los Valles can be seen from very close and after Teguise we finally left the bad weather behind us (although we managed to escape it every time).

We decide to end the day at the same beach of yesterday at Janubio. We try to see the sunset from the top of the volcano Montaña Roja, but it is too far and too late to be in time. So we find a (unfinished) road closer to the sea. We don’t have to drive that far today, and since it looks ash-dark in the direction we’re heading, we decide to climb the volcano we drove around yesterday. It’s a real shame the edges of the mountain are also built on … The view from the top is really nice.

We can really see the crater although the volcano mouth is less spectacular than we expected. We can also see the shower pass we tried to avoid by staying longer on this side of the island. By the time we drive to the north, we realise we made the right decision to stay where we were.

The firefighters have all the trouble in the world to contain the water that turns some roads into rivers … This must have been quite a shower … Everywhere we drive, we have to be very careful because of the water. But the sun is out, and at the beach of La Santa we enjoy our lunch with another spectacular sighting. Once the clouds have closed in on us, we drive further to Famara, our next ‘camping’ spot.

This little village is becoming a surfing hotspot, but we’re out of the tourist season, so all-in-all it’s an easy-going spot. And again we can see La Curiosa and the mysterious bulb of yesterday. Have we already mentioned Lanzarote is a small island?! By the way: there are only a few bitumen roads in the village, the other ‘roads’ are sand roads … We enjoy our dinner and the sunset. Tomorrow we fly home!

see the amazing clouds of Lanzarote on our timelapse: