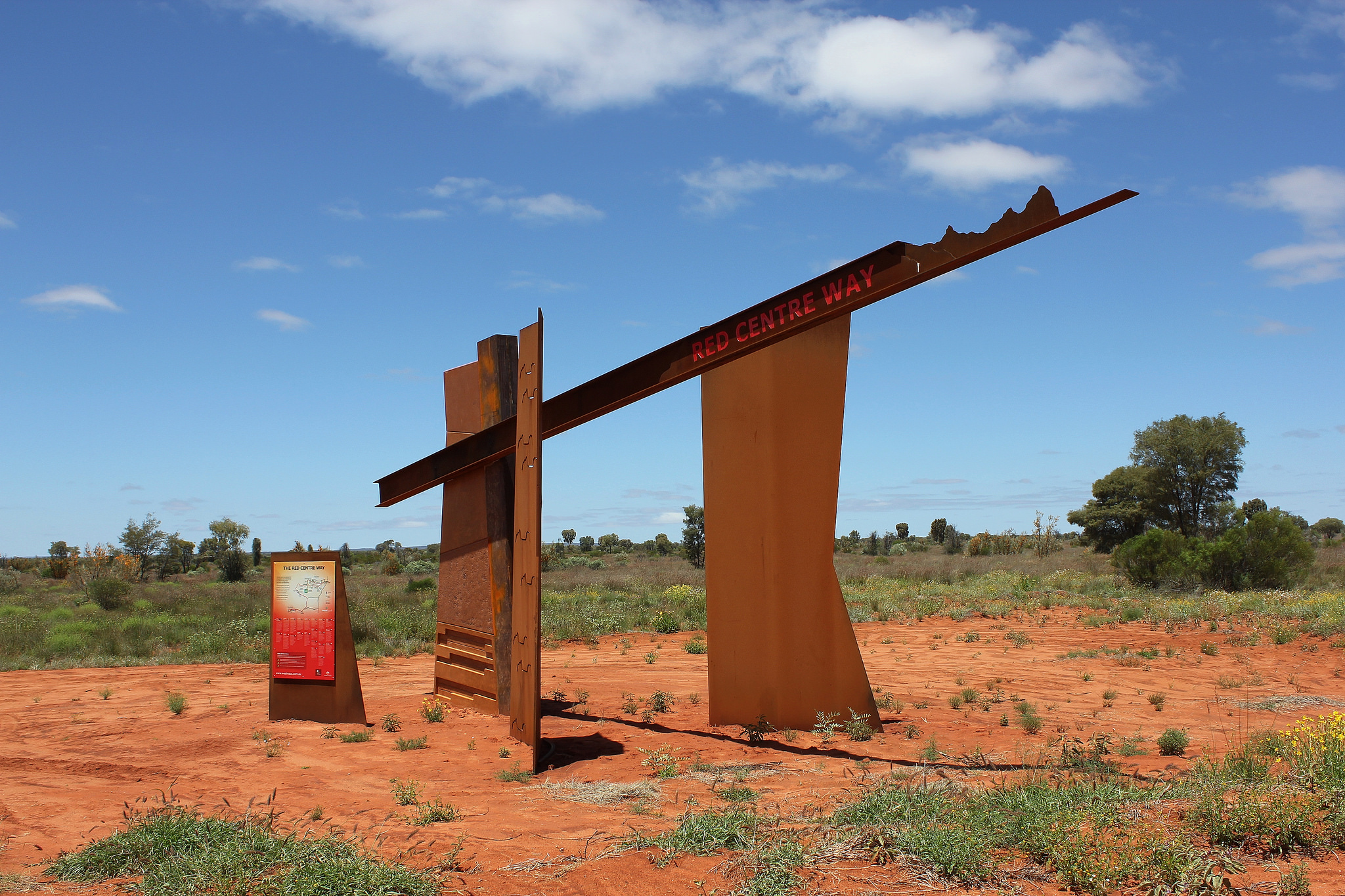 We’ve been to and through the Red Centre twice. The first time we flew in, and only from above you can see how desolated this place really is! Coming in by car is an experience too, driving kilometers along nothing to arrive in a more touristy place. The difference is huge! If you are interested in how we experienced the road trip, check out one of the next posts about the Stuart Highway.

In this post, we’ll make a roundtrip, leaving Uluru-Kata Tjuta aside (that’s for the next post), starting and ending in Alice Springs. The MacDonnell Ranges is a region that is inhabited by Aboriginal people (the Aranda or Arrernte people) for over 40.000 years. Alice Springs is the hub for Aboriginal art till today. The town was ‘founded’ around 1870, when the Overland Telegraph Line was build. At that time, the town was called Stuart Town. Thanks to the building of the railway, the population grew.

By 1933 it got the name ‘Alice Springs’, named after the wife of the Superintendent of Telegraphs. Staying in this town is kind of special, it is obvious Aboriginal people suffer many problems, going out by yourself at night is not recommended, but during the day we never felt insecure. Just use some common sense, don’t photograph people if you haven’t asked, or leave your stuff unattended. The caravan park (Big4) worked very well for us, and we loved going sightseeing.

The first time the flies where horrible, but when we stayed the second time in August, there were none … Some of the sightings we did include ANZAC Hill. From the hill you can enjoy a panoramic view over the town, which is surrounded by the Ranges. The break in the MacDonnell Ranges marks the southern entrance to Alice. We also visited some of the Aboriginal art galleries, just did some window shopping 😉 There are some museums which we didn’t visit, and the School of the Air – an inventive way of teaching children, who live in remote areas, over the radio.

There is more in the Red Centre than only Alice Springs and Uluru. From Alice it is only a few kilometers to the Namatjira Drive (named after one of the most important indigenous artists, and the first Aborigine to get the Australian citizenship in 1956). Nature at here best starts here! There are several places to stop and admire the power of erosion on soft rocks and the enjoy the shadows of the gum trees: Simpsons Gap, Standley Chasm, Serpentine Gorge, Ellery Big Hole, Ochre Pits, Ormiston Gorge. And not to forget: a remembrance monument for the founder of the Royal Flying Doctors: John Flynn (and his wife). All along the road, so you don’t even have do drive huge detours to see something. Most of these places have a special significance to the Aboriginal people.

Serpentine Gorge for instance is a natural pool, but the aborigines believe a serpent lives in the water so they will never go in. Our first stop in 2010 was Glen Helen. Nothing more than a place to sleep and eat, if you have to, you can fuel here too. We enjoyed a thunderstorm in the desert which was special. And Glen Helen Gorge is big! From Glen Helen you’ll drive on dirt road. Some of the places to stop: Mount Sonder and Gosses Bluff. There are more sightings but you’ll have to drive off the road and come back along the same way. Because of that thunderstorm at Glen Helen we weren’t sure if we could drive the Mereenie Loop, for which you need a permit. Most of the times you can get thatpermit at Glen Helen, but they ran out when we were there.

We didn’t have much experience back than, so we decided to do a huge detour to Hermannsburg before driving the Mereenie Loop. We were told we could get our permit there, but at the petrol station it was clear they ran out of permits too. We did get in contact with the police to get an advise on the road conditions of the Mereenie Loop.

The drive towards Hermannsburg was a bit slippery, but as said before, we didn’t have any experience and didn’t know water dries up very fast in this region … So no problems expected J We fueled up in the little town, which was not the best thing to do if you are on a travel budget … Lesson two J But we did see the town, which was an experience on its own. This was the first Aboriginal mission in the Northern Territory, established in 1877 by the Lutherans. An interesting eye opening place … We encountered some young men who worked here at the local hospital, it seems missionary work still takes place in a modern way. So we drove back to the Mereenie-Hermannsburg junction, which in total added 70 km on the counter, cost us some fuel and still The Mereenie Loop however was wonderful. We saw wild horses, local people who were doing something, a flowering outback (which we didn’t expect at all), vast landscapes, … And an endless road which was heavily corrugated (for the people who don’t know what we mean: the road is like the stretch at the beach – at least in Belgium –  where you cannot walk because of the ribs the tight has made).

We drove the whole day and saw a handful of cars (driving, we did see a lot of rusted and dismantled cars as well). Because we were inexperienced we didn’t know how to drive on a corrugated road, which was the reason it took us so long to tackle the Mereenie (195 km normally takes you about 4 hours). Now we know J  Once of the Mereenie Loop, it is just 27 kilometers on bitumen to Kings Canyon.

We walked inside the canyon, so the rim is still on our list J both the walk and the sunset our amazing! There is a resort where you can sleep in all sorts of accommodation since it is the only place where you can stay. The first time we were here we drove from Kings Canyon to Uluru, but we’ll write a separate blogpost about this natural wonder. To drive back to Alice you can drive along the Lasseter Highway, where there is nothing to see.

Another option we took in 2013 is the Ernest Giles Road. Again, dirt road and corrugated (but we know how to drive on those roads now J )and far more interesting. It is a beautiful region, and the most magical place lays at the end of the road: the Henbury Meteorite Craters. It is a Conservation Reserver where you can find 12 craters, formed about 4700 years ago when a meteorite hit the earth.

The route via the Lasseter Highway is about 850 km, add about 200 km to Uluru-Kata Tjuta NP. Along Ernest Giles Road it takes you about 700 km. A long trip, but so beautiful!

The red centre from Travel for Motion on Vimeo.