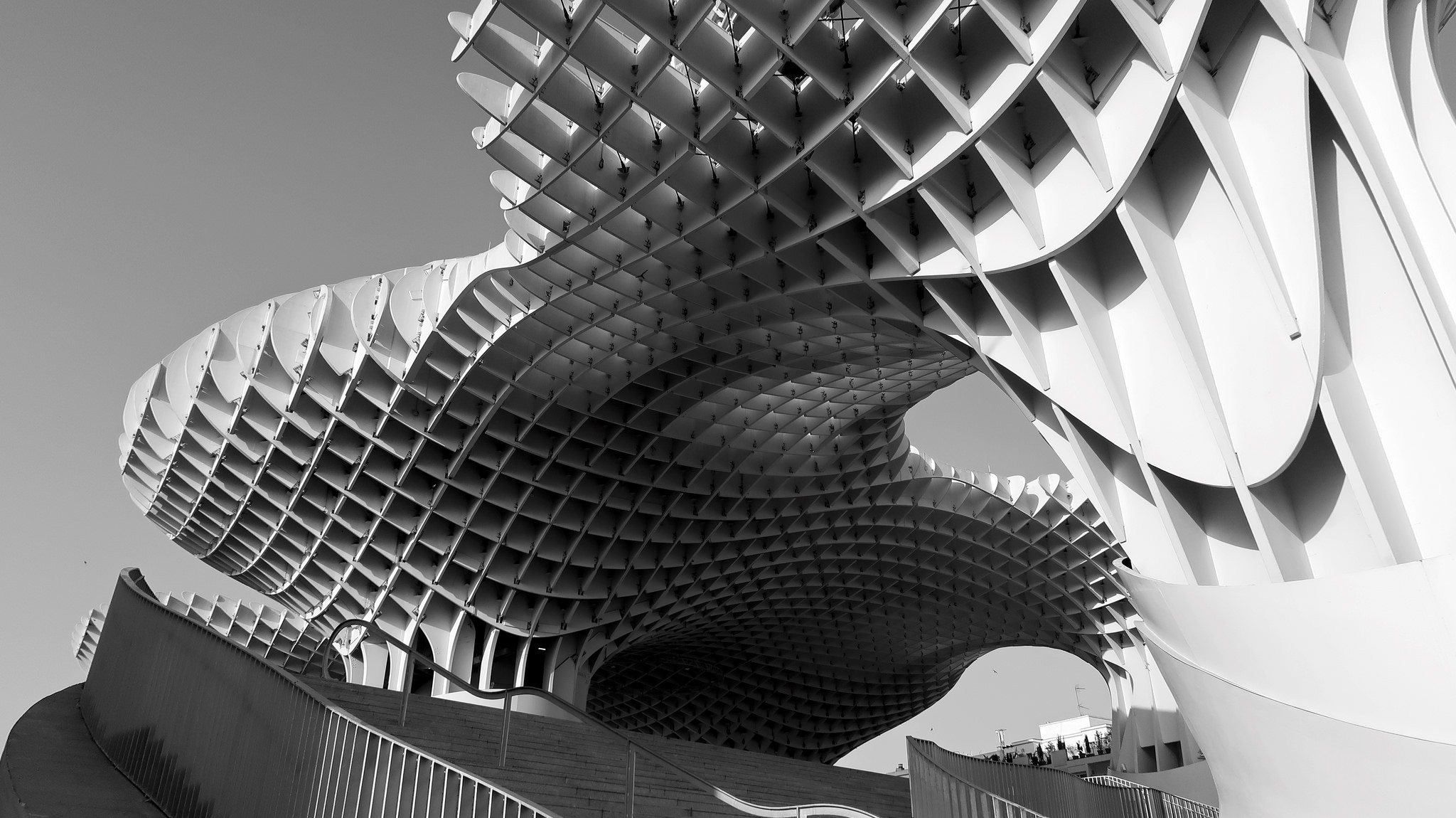 Travelling by train is always an adventure. Even when it is just a short (+1 hour) ride to the airport. But we are experienced with the Belgian railway services, so we do have enough time to buffer a delay of 20 minutes. Once arrived in Sevilla we enjoy the warmth, at least for now… From the airport to the city center is an easy bus ride (€ 8 for 2). Our hotel is situated close to the bus station so we drop our bags and start to explore the city. The Plaza de Espana (built just at the beginning of the 20th Century for the World Expo) is within walking distance (360 view) and a must-see!

So we decide to go further already, and cross the river to the Triana neighbourhood. This is the old gypsy quarter, and very relaxed. Unfortunately the church with the local Madonna has no free entrance – € 2 isn’t much, but we stand on our principles. We are happy with a picture of the poster on the outside 😉 The story of the Madonna is rather funny. There is a Madonna in this neighbourhood, but there’s also one at La Macarena.

Every year the citizens of the two quarters have a parade with their own Madonna and have some sort of a contest. Religion is a very serious thing in Spain! The Capella de los Marineros is a beautiful building, but closed. After having a refreshing ice cream (at 40 degrees we needed one!) we head to the market of Triana, but it’s after 5PM and the market is closed. So back to the city center for dinner at Organic’s and the tram to our hotel!

Because of the weather predictions (for once no rain, but soaring hot), we reschedule our schedule. We head to the quarters a bit further away and start at the ‘Metropol Parasol’. This is the largest wooden structure in the world, in the middle of a busy city (360 view). Quite unique, but still closed at 9AM 🙂 By 10AM we go back to ‘Las Setas’ or the ‘Mushrooms’ and go up for a refreshing look over the city. For only € 3 per person, one free drink included! The Macarena quarter is our next target.

By accident we find the Omnium Sanctorum and the market behind, but we leave soon as a funeral is about to start. The basilica with the rivaling Madonna is free to visit. Every now and then our national pride ‘Manneke Pis’ (in Brussels) gets dressed to the occasion. Well … His stylists should come to Sevilla if they are out of inspiration! We have a look at the old rampart, and decide to go to the old Expo 92 domain. On our way (we went by foot yes) we stop at the Torre de Clerigos. Strange to see we are the only tourists here! For just € 2 per person we are back in the sky!

After some relaxing and enjoying the rehearsal of a local band, we finally head to our destination of the afternoon. We expected a lot of the Expo 92 domain, because there’s nowhere to go without seeing the advertisements for the 25th anniversary of the world exhibition. The bigger is our disappointment! We feel like we’re urbexing, but legally. Every single bit of the domain is completely run-down. But it is quiet at this side of the river! What a strange feeling!

Once back at the other side of the river, we go to the Plaza de Toro, where we find out there is a bull fighting the next day. We hesitate to pay € 8 per person for a guided tour, but once again we stand on our principles. There is no way we can justify any payment to any institution conserving this cruel practise. We find some dinner (tapas in one restaurant, proper dinner in another) and finish off this day!

Day 3 goes sligthly different than planned. We want to explore the city center, and head of by foot. Easy enough, just follow the tram tracks! Our day starts at the old tabacco factory, which is now a university building. Along de Jardines del Murillo we get into the old Jewish quarter. Today we would like to visit the Alcazar palace, but the queue to enter the building is massive … We decide to give the cathedral a try first. We would really like to see the tomb of Columbus, who is buried here. Unfortunately we didn’t prepare for the Corpus Christi festivities … The cathedral is closed today, the Giralda tower is open in the late afternoon.

So we decide to go back to the Alcazar Palace, where the queue is smaller, and we can wait in the shadow. By the time we get to the check-out, all tickets to visit the upper floor are sold out. The full entry price is € 9,5 per person, and although it is without doubt a beautiful place, we don’t want to pay 20 euro. The Torre del oro is closed as well.

We walk back to the city center, where the last processions are finished, we try to get inside the cathedral, although not all parts are open to the public. We don’t find the tomb but the gigantic statues of the saints are a nice alternative. Back to Las Setas again. Now the patio is open (which was closed earlier in the week), and we pass some time here. People even take a nap here 🙂

In the afternoon we climb the Giralda (€ 4 per person, includes the orange tree garden). This is an easy climb, since the muezzin in the 12th Century didn’t want to walk by himself to the top of the tower. His donkey had to carrey him, so there are no steps! The view is beautiful, but the heat has reached the top of the old minaret at about 80 meter high … 43 degrees and counting! We take a rest in the orange tree garden and go back to the hotel by tram (a/c!). For dinner we walk back to the city center, but by then the temperature is slowly going down … Tomorrow we head for Cordoba!

some articles about Seville: The Guardian city guide  – The Telegraph where to stay in Seville