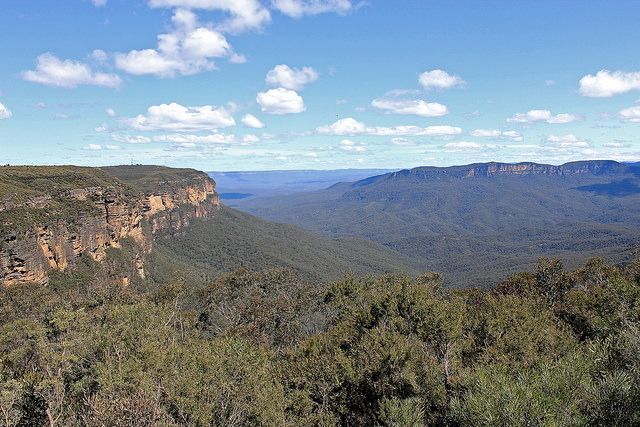 Only an hour from Sydney there is a magical place, covered with blue mist … The Blue Mountains. Because of its proximity to Sydney, it makes for a perfect daytrip (for those who don’t have a car, the train will get you there just as easy). Covering an area of over 1,400 square kilometers, it is easy to find some peace around here. By the way, this National Park is World Heritage Listed since 2000.

For the meaning of the name ‘Blue Mountains’, there are some theories (source: www.bluemountainsheritage.com.au): “It is commonly believed that the blue haze blanketing the mountains is created by the atmosphere whereby dispersed droplets of Eucalypt oil combine with dust particles and water vapour to scatter refracted rays of light which are largely blue in colour.

However, because this is a common phenomena shared by mountain ranges elsewhere in the world, another theory suggests that:

the sky is blue because tiny air molecules of oxygen and nitrogen, water molecules, and dust motes interact with light. The small size of these particles means that high-frequency light (like, blue) is much more likely to interact than low-frequency light (such as red). The interaction scatters blue light in all directions. Consequently, we are more likely to see blue light than any other colour. Thus, the sky looks blue. Anyway, the sky is blue and it looks fabulous! There is lots to do, but we only had limited time and stuck to the more touristic attractions (which are beautiful nevertheless). Be sure to have a stop at the Horseshoe Falls and the Wentworth Falls (to see the first you need your walking shoes, for the latter you might need your walking shoes if you want to walk around them). Echo Point and The Three Sisters are obvious … And as you are in Australia, you have to make yourself familiar with the Aborigines stories. The Three Sisters are three Aborigine sisters who turned into stones as their dad tried to protect them from an evil creature. While doing so, he lost his magic stick to return them alive. Today, the father is still looking for his stick, and the girls remain petrified. We stayed at Katoomba, the biggest city in the Mountains. The first time we were there, we wanted to make a circular loop (the first day we started in Penrith) from Katoomba to the north via Bell and Mount Tomah, but people at the Visitor Information Centre advised us to drive back to Sydney via the same route we came in (we had to deliver our hired car back and take a plane). Last year, horrible bushfires affected a lot of the National Park – one of the worst ever, but by the time we got there, we hardly noticed anything of it. One reason for this might be we just drove through because of the rain and the cold, we couldn’t imagine ourselves this same area was hit by a heat wave and bushfires just days before.