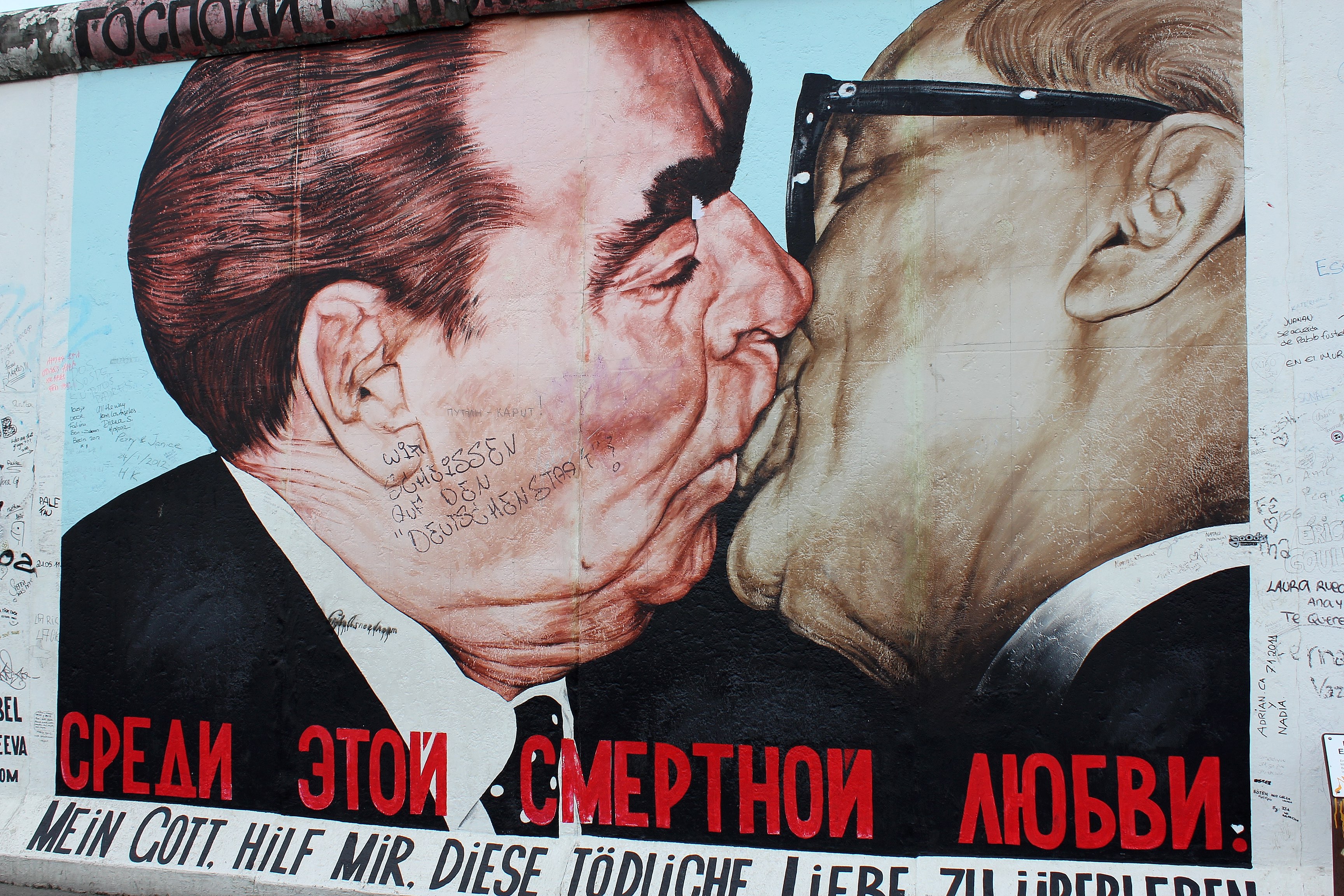 Weatherwise, Berlin is an easy destination: you’re almost certain it will be dry. Luckily our second visit, during Spring – May, was a lot warmer than the first visit. Perfect time to explore the city and to stay outside!

We started this trip with a walk in and around Kreuzberg. The name of this quarter comes from the mountain (hill 🙂 ) on which it is build – Kreuzberg. On top of the hill there is a big cross, to remember the Prusian victory on Napoleon. The monument is easily reached after a walk through the Viktoriapark and gives a nice view over the city. From the park it is only a small walk to Tempelhofer Freiheit. The old airport Tempelhof was closed in 2008, one year later it re-opened as a park for the public. This is a must-see! You can have a guided tour in the old airport buildings, which were build from the ’20s (and they still have a twenties-feeling). The airport has a significant historical meaning, while it was the airport the Americans used to supply the Berliners during the Cold War. Now you can walk around the airfield, and hardly imagine this was a working airport in the middle of the city till recently.

Close to Tempelhof, you’ll find a few cemetries, both muslim and christian, both ‘new’ and ‘old’. You might think we are very strange people because we do like to visit those cemetries … 🙂 But it is fascinating to see how different cultures cope with death and mourning. Especially in Berlin you can see this. We ended this walk with a visit to the Turkish market along the Landwehrkanal. We are lovers of culture, nature and history. The perfect place to sniff some nature in a city, besides the numeric and enormous parks, is the Botanical Garden (small entrance fee though). Be sure to have a delicious ice cream when you are around here (opposite the entrance of the train station). The perfect place to relax and enjoy the sun. And you don’t have to be afraid to run out of water … Berliners think of everything, you’ll find free water fontains all around the park! There are some glass houses as well that are well worth to visit, but why walk inside when there is a huge park with special trees and plants?

To find out some more about the history of Berlin, we decided to have a look at the Gedänkstätte Berliner Mauer. This might be more interesting to visit than the East Side Gallery. You can have a look (from a viewing platform) at how the Wall was build. We speak of ‘the Wall’ but actually there were two walls, with a watchtower and a ‘death zone’ in between so nobody could escape by climbing over the Wall. This place really gives you a good insight on how people lived during those days, and what the impact on the daily life of ordinary Berliners was. A remarkable place to visit is the Olympiastadion, just outside the centre of Berlin (easily accessible by train). It was build for the 1936 Olympics (Jesse Owens won four medals during that Olympiade … – nazi era indeed …). And this place still has that feeling, it is one of the most bombastic buildings we ever saw … Luckily today the stadium is still used as a sports venue. Be sure to visit the Glockenturm (Bell Tower) opposite the stadium as well. Visiting parliaments is another ritual when we citytrip … Entrance to the Reichstag is free, but you have to make a reservation beforehand (background check included 😉 ). The building dates from 1894, was severely damaged several times ever since, and after the Reunification (of East and West) the seat of the German Parliament (during the Cold War Bonn was the capital). The view from the top is amazing!

When you wander around, be sure to pass by Gendarmenmarkt. At this square there are two cathedrals (French and German) and the concert hall. Enough culture for sure in Berlin!

If you want to find out more, and don’t want to rely on travel guides as only source of information, these articles might be interesting:

the complete photo album on