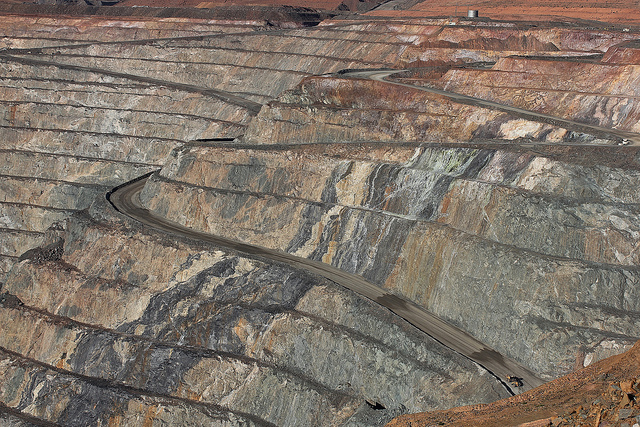 When going to Australia, one might think there are only beaches to go to. Well, those guys are wrong. The beaches are one sight, but inland Australia has a lot to offer! Back in 2011, we drove from Perth to Hyden. Nothing much to see for 350 km, except for a small town called York and a smaller town called Corrigin. And some oversized transport, impressive if you haven’t seen this before (like us…).  Our first destination on this trip was Hyden. The only reason to go there is the impressive Wave Rock. There isn’t an ocean to find for hundreds of kkilometres, but the Wave is formed by water! Millions of years ago water soaked into Hyden Rock (the ground level was up to the top of the wave today). A lip was formed because the water at the surface dried out, but the soil staued wet and rotted. That crumbled rock washed away, and what’s left was a slope: the Wave Rock. 15 metres high and 110 metres long. You can actually climb the Rock, the view from the top is magnificent, especially at sunset! It is surprising to see how many boulders there are. And perhaps more surprisingly: there is a huge water reservoir on top of the Wave…

A bit further away other remarkable sights can be found: the first is the Hippo Yawn (it is possible you are told you have to pay to park, but there is a free car park as well). The yawn is formed by a tafone or window in a big boulder. Again, nature was at work here. Mostly, tafoni are formed by water and wind, but the Hippo Yawn is probably the result of minerals crystallised out of the original boulder. The process of erosion is still going on, it takes millions of years … eventually the yawn will break apart. The second sight you want to see here is Mulka’s Cave. It contains the largest collection of Aboriginal paintings in this region of Western Australia: over 450 stencils and paintings, mostly hand stencils, can be found here!

We drove another 500 km to the west, to Kalgoorlie. The town was established after gold was found by Paddy Hannan in 1893. The town developed when a water pipe line came into place, and found a second life after the nickel boom in the 1960s. Kalgoorlie is home to the biggest open-air gold mine of Australia, known as the Super Pit. We wanted to see a blast, but unfortunately we drove into town and heard a blast (and felt it) – so we where too late. The second day it started raining: the blast was cancelled. But nevertheless, the view from the lookout over the activities is impressive. Knowing those machines are gigantic but looking so small makes you realize how big this mine actually is.

Some critical points which aren’t raised in tourism offices or travel guides: the aboriginal people who are the traditional owners of this land are living in humiliating conditions, far away from the tourists, at the other side of the mine. They receive almost nothing of the money that is made from the gold digging. The mine itself won’t last forever. We heard stories the mining can continue for another few years, after that there will be no more gold. What will happen with the town, which lives from the gold mine although there are other mines surrounding the town as well, is not clear.