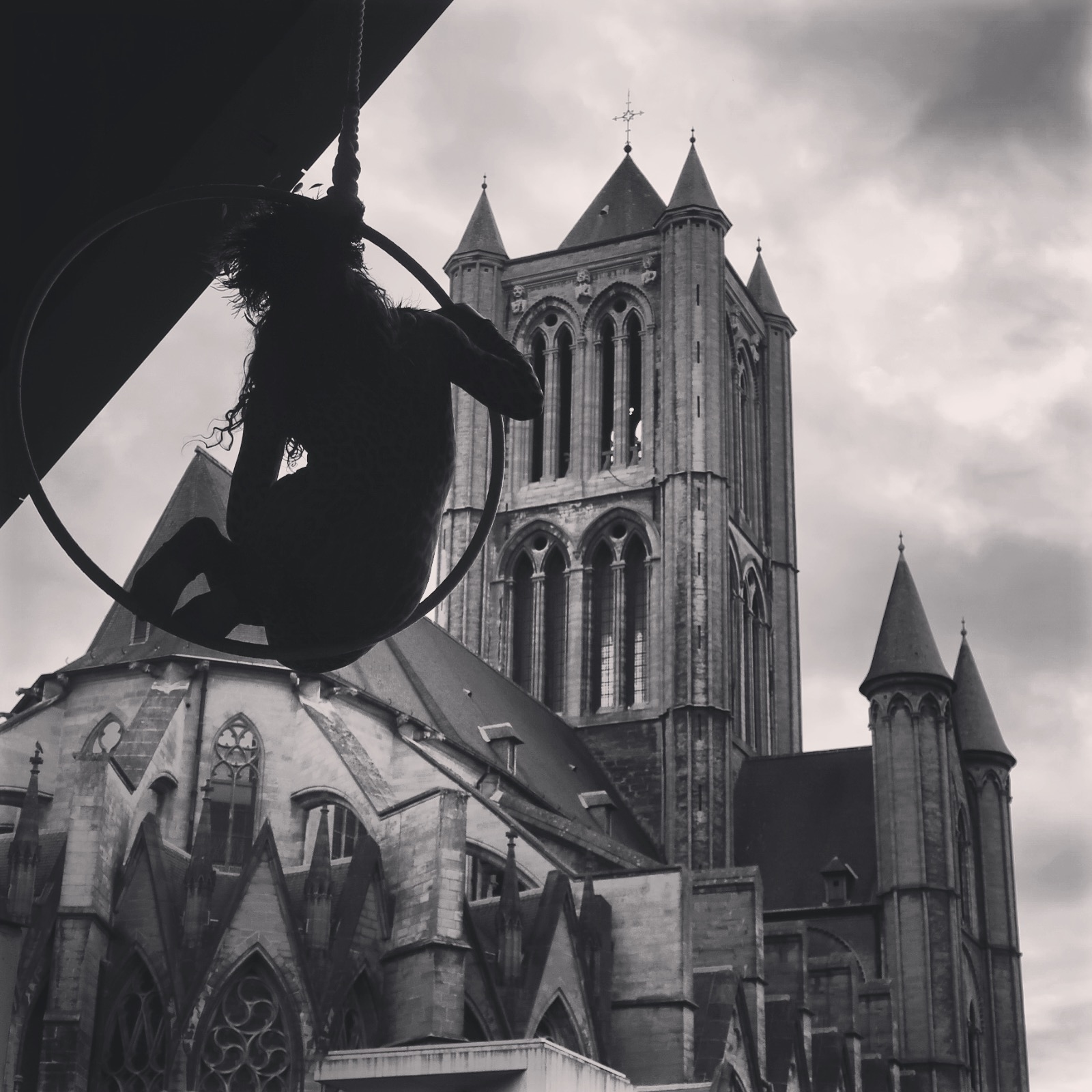 Every year, in the week of the 21st of July, our lovely city is turned into one huge festival site.
During 10 days, starting on Friday night until the next Sunday, you can just be yourself or somebody else; enjoy street artists, gigs, markets or just watch an amazing flow of people.
Most of the activities are outside and for free, others you have to pay for, but all are special and let you see this city from a whole different perspective!

This year, it is actually the first time ever we went to the Gentse Feesten (we translated this into Ghent City Festival, not sure if there even is a translation) almost every day. Not to party all night long, but to enjoy the vibrant although easygoing flair.

A small oversight of some activities? Here we go! The first day is always kicked off with a parade. This year however, it was not the traditional parade of groups presenting what they offer during the festival. No, this year, the festival was kicked off by ‘The longest Fanfare’. Almost 600 people joined The Verdammte Spielerei to open the Gentse Feesten. Unfortunately, we had to wait for more than an hour to see something of the parade. And it turned out we kind of misjudged the happening. The musicians just gathered on the square between the Belfry and the Cathedral (beautiful place though), but the parade was limited to the artists of The Verdammte Spielerei: 6 against 600 …

The next day another new parade, a real one this time, marched through the city: the Kleurenstoet (Colour Parade). We got on top of the Belfry to see small groups of small people passing by, introducing Gentopia: as they say ‘a wonderful kids village’ with their own passports and a kids mayor! The Ghent City Festival is not only for adults. On the contrary: we’ve never seen so many activities especially for children like this year. Although we are not that young anymore, one of the most beautiful kids activities we found at the old architectural site of the ruins of the St. Bavo Abbey.  Do the VR tour beneath:

MiramirO is a group of circus artists with crazy but wonderful installations and performances. Both for children and adults alike to enjoy! And on the Oude Beestenmarkt we saw another kids only terrain for the first time.

Tradition still stands somehow on the Genste Feesten. The fireworks are always displayed at the first Sunday of the festival. And yes, this year was not different. Or was it? Unfortunately, the political situation of today worldwide afflicted this festival as well: less spectators, more police forces. But hey, nothing can stop us from enjoying the good things of life! The fireworks were short but amazing, with beautiful music of our friends of The Verdammte Spielerei. I took the musquito bites for granted 😉

Doesn’t matter if you’re coming to see a special artist or performance you have on your list, or you just walk around: there is always something interesting to enjoy. Ghent is famous for the puppet buskers performing at the festival (there even is a competition with some very nice prices to win). From the afternoon about every square in town has an artist giving it’s all. By the way: if you want to see some die-hards partying till the next morning, there is only one place to go: Vlasmarkt! World famous with locals, but only for those with a very good stomach to walk through… Also during the first days of the festival: Boomtown on the Kouter. We wouldn’t now one name to categorize this small festival within the big festival. Artists bringing music of all kinds, both inside (you have to pay for those concerts) and outside (for free). Not to confuse with Boombal at the Baudelopark! That’s the place to be if you want to learn how to dance salsa or folk. And if you’re into brassbands, than there is a new event since this year: Mardi Gras. Bourbon Street no longer belongs to New Orleans, but to our very own city! Carnaval as it should be, with beautiful girls dancing on amazing music. On the other hand, a long standing event Polé Polé is not to be missed! Again, situated on a wonderful site, along the Lys river, it’s impossible not to shake your hips on these vibes.

Some energy left to see some real Ghentian sites? If yes, you should definitely go to our botanic garden. Not that big, but well conserved. We took a guided tour in the best language ever (read: our dialect). It is open year-round and free to enter. The churches and cathedral are open as usual and of course not to be missed. This year, we visited an exposition in the St. Nicolas Church. Pictures representing the meaning of article 1 of the Universal Declaration of Human Rights. All people are born free and equal in dignity and rights. Today that right is highly in danger. In between all the partying, it is good to keep this in mind! Another must-see during the festival, and another tradition still standing, is the parade of the noose-wearers. It represents a small but very important part of our history, an incident which made Ghentians famous and proud. Charles V imposed a new taks in 1537, but the city council refused to pay. At that time, the economical wonder years had long been lost.

Charles V himself came to his birth city (!) in 1540 to punish the rebellious Ghentians. Ghent loses important privileges, and Klokke Roeland – the biggest clock of the belfry – has to be taken out of the belfry (it still hangs outside the belfry). Charles V humiliates the Ghentians by forcing the notables and workers alike to march to his residence (Prinsenhof) barefoot and dressed in black. Some have to march in white with a noose (a rope) around their neck: they ‘deserved’ to be hanged and have to beg for mercy.

To end the Ghent City Festival, we have a ‘day of empty wallets’ on the last day 🙂 Check out the market and spend your last euro’s!