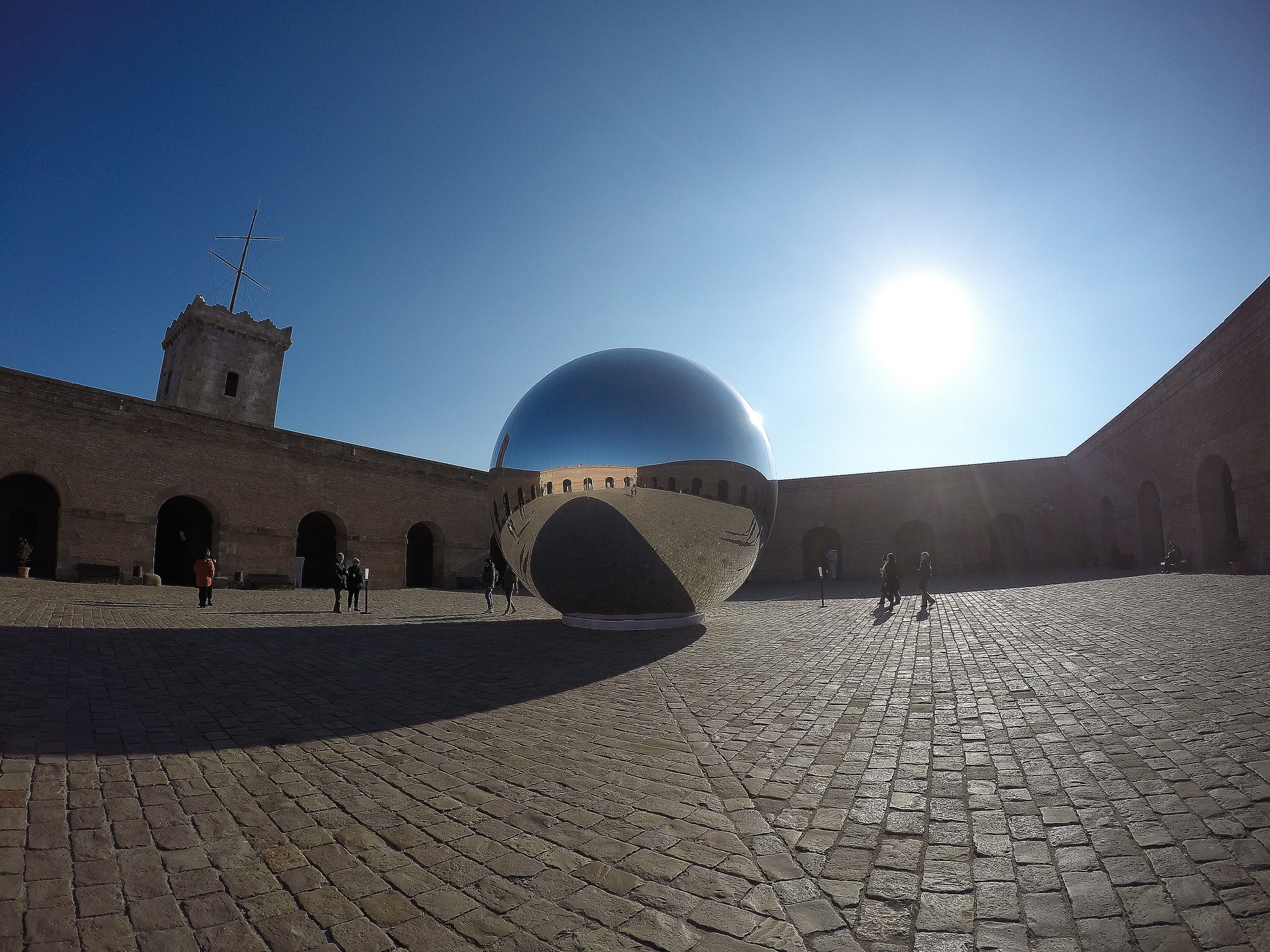 A last minute citytrip because we were desperately in need of some sun and warmth, and because it was my birthday (what a nice surprise!). We booked our tickets with Brussels Airlines, the national Belgian airline. Although only one day before our departure, we could still buy relatively cheap tickets. One of us had been to Barcelona before, ages ago so didn’t remember everything. From the airport you have two options to go to the city center: by train or by airport express bus. We decided to take our chances by train. A very friendly tourist gave us his 10-rides ticket, at first I thought this was some kind of a con, but it actually worked and we could use it later on in the weekend as well!

One of the first things we noticed was every sign is bilingual (Spanish and Catalan). Although we knew off course Barcelona is the capital of Catalonia, and there has been an illegal referendum on independence from Spain just a few weeks before. Catalan is a totally different language! Luckily one of us speaks a little bit Spanish, just enough to ask the basic things … It seemed nobody could understand English.

We stayed in the city center, in a quiet street and in a so-called ‘soundproof’ hotel – Da Vincci Gala. Well… the room wasn’t exactly soundproof J But I got a plate with fruit as a birthday present, which was a nice gesture. From our hotel it was only a 5-minutes walk to the Ramblas, the world famous avenue with street artists. Perhaps because we were there in Winter, but we didn’t see street artists, and you have to be aware of pick pockets. But you cannot visit Barcelona without a walk on the Ramblas! If you’d walk the 1200 meters, you would end up at the seaside. Be sure to look around you as well, some houses have magnificent facades… That night we also paid a visit to the Antic Hospital de la Santa Creu, which now houses the national library. And off course we couldn’t resist the Mercado de la Boquería … Fresh fruit and veg, meat and fish for the non-vegetarians, nuts, bread … everything you can think of which is eatable J At this place there was already some sort of market around 1200! The building of the market as it is known today started in 1836.

The second day of our visit started early, which is exactly what we like! Montjuïc was the first destination of the day. We wanted to take the ‘Funicular’ – an old tram – from the metro station, but unfortunately the line was closed due to construction works. The alternative was the bus with a driver who didn’t speak a word of English, and we couldn’t explain in Spanish J . But it was quite obvious when we got there: we had to walk to the top because the cable car (Telefèric) which would take you from the bus stop to the top wasn’t open yet … The disadvantage of getting somewhere very early 😉 Anyway, the view over the city was beautiful! The mountain has a history dating back as far as the time of the Celts and the Romans … More recently, the site was developed for the 1929 World Exhibition and later for the Olympics of 1992. The mountain is named ‘the Jewish Mountain’ after an important medieval Jewish cemetery. There are many sightings well worth a visit, like the Palau Nacional, the Magic Fountain (at night there is a light and sound show, magical!), the Olympic Stadion, the National Art Museum, the Fundacio Joan Miro, … Which we didn’t visit because we lacked time J  We did visit the Montjuïc Castle. An impressive fortress on top of the mountain, built in 1640. From that day the fortress’ main function was to protect the city. But from the late 19th Century it served as a prison and an execution place till the end of the Franco regime. Today you can walk around on the site of the castle, and enjoy the magnificent views over the city and the harbour. The tower on top of the castle functioned as a lighthouse from the 11th Century, and it was used by an astronomer in the late 18th Century to develop the decimal metric system.

The harbour was the next item on our to-do list. There are a few options to go down: by foot, by bus, by cable car… We thought about taking the cable car, after all, the view stays beautiful, but then we saw the price 😉 So we decided to add some more walking kilometers J One of the first sightings is the ‘Mirador de Colom’ or the Columbus Monument. It stands at the end of the Ramblas, in front of Port Vell, and you can actually go on top (it is only 60 meters, so there are better lookouts). It was built in 1888 for the World Exhibition and is a tribute to Columbus who disembarked in Barcelona when he came back from his expedition to America (the statue points in the direction of that exact place). In those days it was a special monument because it was supplied with the first hydraulic lift in Barcelona. From the Mirador it is only a few steps to the harbour, where you can walk over the Rambla de Mar (and perhaps are lucky enough to see the bridge opening) and enjoy the peace at the back of the port, although the sailing boats are a nice sight as well. When you want to see some authentic Barcelona, you should definitely walk through the small streets of La Barceloneta (good food as well!). After having walked for hours, we ended up at the beach and enjoyed the sun for some time!

But city tripping is all about discovering, so after a good rest we walked cross the Parc de la Barceloneta. Nothing really special, except for a tower we could see from the beach: the Torre de les Aigües or the Water Tower. It was built in 1870 and was used to supply the houses of the Eixample district of water. Now there is an outside swimming pool (in summer we suppose). From this park we walked to the last destination of the day: Parc de la Ciutadella. On our way we had a quick look at one the train stations of Barcelona: Estaçio de França. If you enter the park from this side, you’ll find the zoo at your right, and the park itself at your left. At this place, before the park was developed in the late 19th Century, there was a fortress (Ciutadella). It is supposed to be the biggest park of Barcelona, which we thought was a bit disappointing … Anyway, we would still suggest to have a look there. The parliament of Catalonia is set in the park, and there are some nice art works of modernist artists. Unfortunately there is no public entrance to the Castell dels Tres Dragons, which is now part of the natural history museum. But no restrictions to view and climb the famous fountain, on which the young Gaudi co-worked. We left the park at the other side (north) via the Arc de Triomf (not as impressive as the one in Paris). Again a monument designed for the World Exhibition in 1929.

Everyone who visits Barcelona has to see the Sagrada Familia. We left the hotel very early on Sunday, and walked towards the cathedral of which the building started in 1882 but still hasn’t finished. Gaudi is assigned with the building of the cathedral in 1883 after the first architect resigned. It will become the pièce de résistance of Gaudi. The man dies in 1926 after being runned over by a tram, and is buried in the cathedral. The building and construction continues and in 2010 the cathedral was consecrated by the pope. It now is a basilica. The estimation is the building will be finished in 2026. Whether you have positive or negative feelings about this strange church, it is a fascinating place! We didn’t go inside. There is a small park though in front and at the back of the church (Plaça Gaudi is more beautiful).  Be there early to avoid to much tourists. We decided to make this a ‘Gaudi-day’ and took the metro to the World Heritage Listed Park Guëll, named after the entrepreneur who assigned Gaudi with the construction of the park in 1900. Be sure to go all the way to the top, to the cross. The view over the city is just amazing! We enjoyed the park and the magical atmosphere. The imagination of one man led to strange but beaut
iful creations. We only visited the free zone, unfortunately there are lots of places you cannot visit without a ticket … And here too you have to be vigilant for pick pockets.

To stay in the modernist flow, we absolutely wanted to see La Pedrera. On our way, we passed the Casa Terrades ‘Les Punxes’ (House of Spikes). The building was completed in 1905 and is kind of a medieval castle with turrets. You cannot enter the house, but the façade is quite spectacular. So, La Pedrera … It is kind of strange to see such a building in the middle of a shopping avenue J Of the hand of Gaudi, no mistake about that! Unfortunately we couldn’t go inside because of a private venue taking place, but the pictures we saw of the roof seemed pretty amazing. There are actually people living here, in a World Heritage Listed building! Just across the street there are two more modernist houses: Casa Battlo (right) and Casa Amatller (left). The first one was built between 1904 and 1906 by … Gaudi, off course J The roof represents the back of a dragon. The house was the residence of the family Battlo (important textile industrialist) – Godo (founders of a newspaper). The house is open to the public. Next to the Casa Battlo is the Casa Amatller, built by Puig I Cadafalch. You’ll have to decide for yourself which one you like the most J To end this beautiful day we walked through the ‘barrio’ Gotic, an old part of the town. You cannot miss some extraordinary buildings on your way, like the Palau de la Mùsica Catalana, or the beautiful facades some houses have. Not Gaudi, but another modernist architect named Domènech i Montaner designed the Palau (Palace) that is a concert hall. But we were going to Barri Gotic: this is how Barcelona looked like in the medieval times, when it was much smaller than it is today. The cathedral forms the centerpiece of this quarter, dating from the 13th Century, but it is believed there was some sort of a church at this place from the year 343 … It is possible to go up to the roof of the cathedral and have a view over the city. The streets around the cathedral are narrow and almost breath a medieval atmosphere, with chapels, bows, centuries old sculptures … You can easily get lost here, but just as easily you’ll end up at the seaside J Barcelona truly is a city living from and at the sea, which makes it a very nice place to visit (at least for us) since you can always escape from the hustle and bustle of the city.

On our way back to the airport, we tried the airport express bus. To our surprise, it took us back to the airport in less than half an hour although we thought we had to leave in time because of the Monday morning rush hour (but this is Spain, so rush hour may start a bit later than in other parts of Europe 😉 ). We took the bus at Plaça de Catalunya, in the middle of the city center, and a very busy junction of buses and metros. We think the square itself is quite nice, with some fountains and statues, but unfortunately construction works didn’t allow us to have a clear view on that.