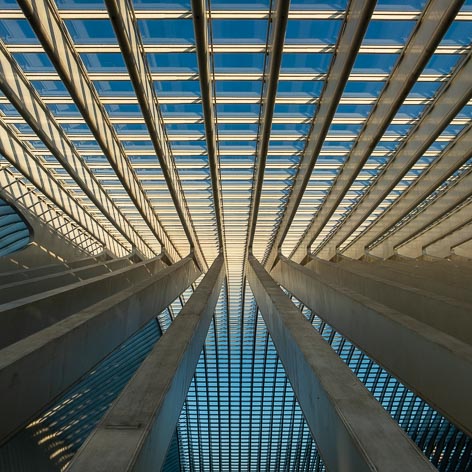 In 1843, the first international railway connection was born, linking Liège to Aachen and Cologne. At the end of the 20th century high speed trains were introduced, requiring a new station since the existing platforms were too small. The new station, by the architect Santiago Calatrava, was officially opened on 18 September 2009. The building costs of the project were €312 million. Calatrava conceived the station as a link between two distinct areas of the city of Liège, which was separated previously by the railroad tracks. North of the site is a rundown urban area, laid out in a typical 19th century style.
The slopes of the Cointe Hill located on the south host a less dense, landscaped residential area. Calatrava designed a 200-meter-wide passenger terminal, built symmetrically about a northwest-southeast axis that bridges these two distinct areas with an arched roof for the terminal building, which extends over the five train platforms for a further 145 meters. Transparency is achieved by means of the monumental vault, a glass and steel construction, which creates a sense of continuity between the station and the city.
The project has no facade in the traditional sense, since the interaction between interior and exterior is seamless. The monumental roof becomes, in effect, the project’s facade. To an observer on the hill, the roof reveals something of the inner organization of the station. To an observer within the station, the arches frame provides comanding views to the outside. At night the structure becomes even more impressive .
See more on my Behance project or on this Flickr album.
Scroll UpScroll Up