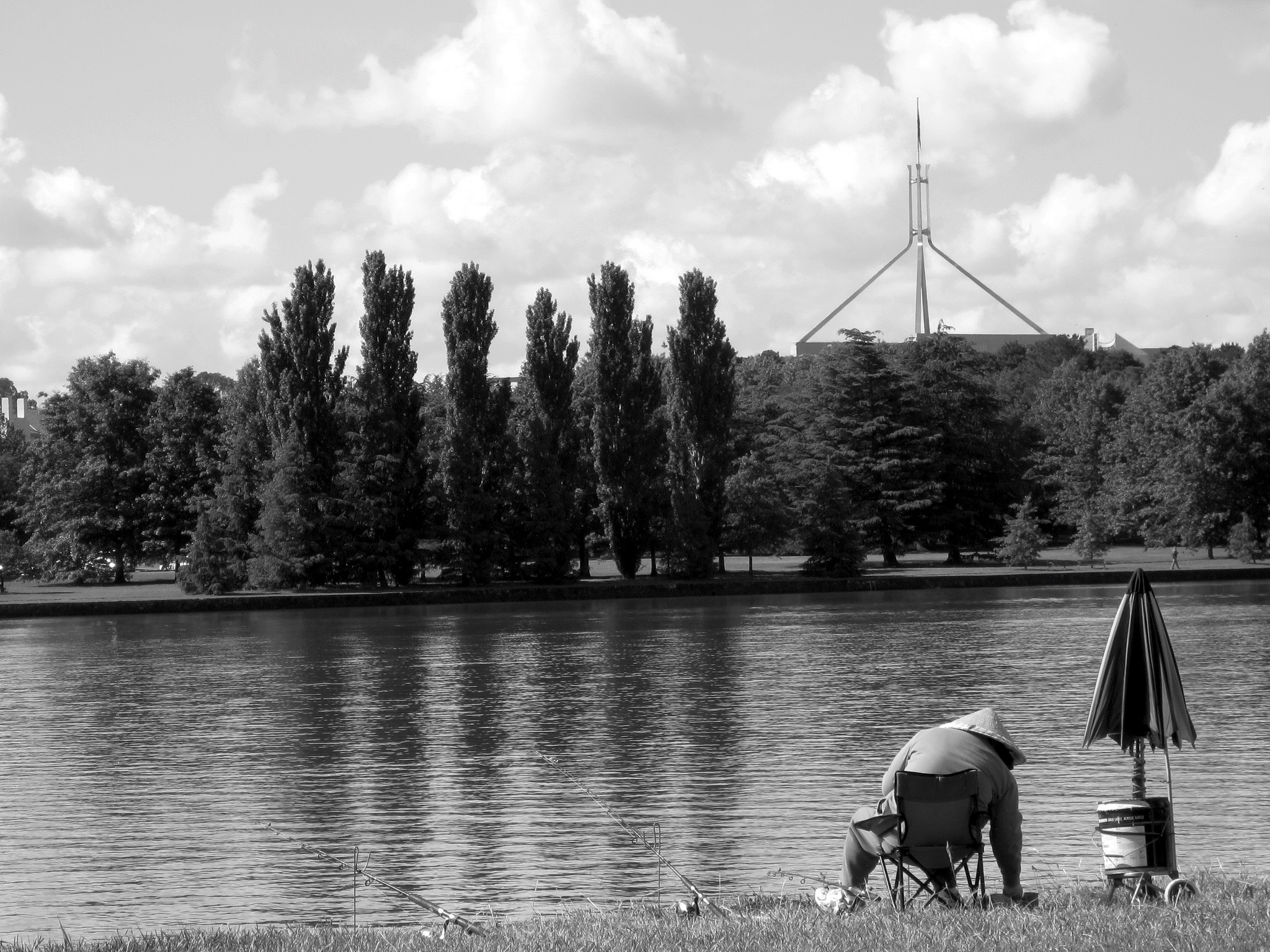 Canberra, the capital of Australia … Only because they couldn’t decide between Melbourne and Sydney. Just in between these two cities, completely artificial, a weird patron of circles and neighbourhoods, two lakes and lots of green. The building of the Australian Capital Territory began in 1909, the building of Canberra (the meeting place in Aboriginal language) only in 1913. Only a handful of tourists come here, and certainly not too many backpackers like us! Canberra is surrounded by mountains, but is only a short drive (relatively, to Australian standards ;)) away from the big cities and the coast. We’ve visited the Parliament House twice now, there is an interesting free tour about how the parliament works, with the two Chambers and the representation of the territories and states. The building itself is also worth a visit. The grassy hills lead to the flag pole, this means people actually work ‘under the ground’. Tip: go to the roof for a very nice view over the Old Parliament House (used between 1927 and 1988) and The War Memorial.

In between the two parliaments you can visit a few musea (Museum of Australian Democracy, National Portrait Gallery, the Questacon, …) but the walk itself is also very nice. Don’t be surprised to see a tent camp in front of the Old House, this is the Aboriginal Tent Embassy and exists since the 70’s. Towards the War Memorial there are several monuments commemorating (sometimes it looks more like glorification) several wars, the soldiers and the victims.
The Memorial intends to be a national centre of commemoration of Australia involved in several wars, the area where they actually remember fallen soldiers is beautiful. If you have the chance of attending the ceremony on Remembrance Day, do so, this is very moving! Another museum to visit is the National Museum of Australia. Again, Canberrians have some well designed buildings!

Since this is the capital, there are a lot of embassies, most of them in the same neighbourhood, and some are just a piece of art! And yes, we are a small country, but the Belgian embassy is big!

For the best view over the city, we would recommend going to Black Mountain, the Telstra Tower was completed around 1980 and is about 190 meters heigh. The viewing platform is at about 60 meters height, but because the tower is build on a mountain of 806m it looks like if you are between the clouds :)) (freezing cold too!).

Canberra isn’t only about buildings, it must be one of the most open capitals in the world (in terms of space) … You can walk or bike around Lake Burley Griffin or explore one of the many nature reserves and parks. One of the best ways to have a feeling of Canberra must be the view from a hot air balloon (our wallet didn’t permit to have a flight though 😉 ), Canberra even hosts a special hot air balloon festival each year!

If you are travelling by car and you want to know more of the world beyond Earth, you should also go to the Canberra Deep Space Communication Complex.

Because we think it is a shame to miss Canberra when you visit Australia, we’ve listed some reasons why you should go:

– It is the capital of Australia (visiting a country without having visited the capital isn’t possible) and only a few hours from Sydney.

– It must be the most open and green (but perhaps confusing) capital of the world.

– The National Museum is a must on your to do – list.

– Another must is a visit to the Parliament (you can just walk in!).

– If you have the chance of attending the ceremony on Remembrance Day, you should!

Here are some more interesting articles if you want to know more: