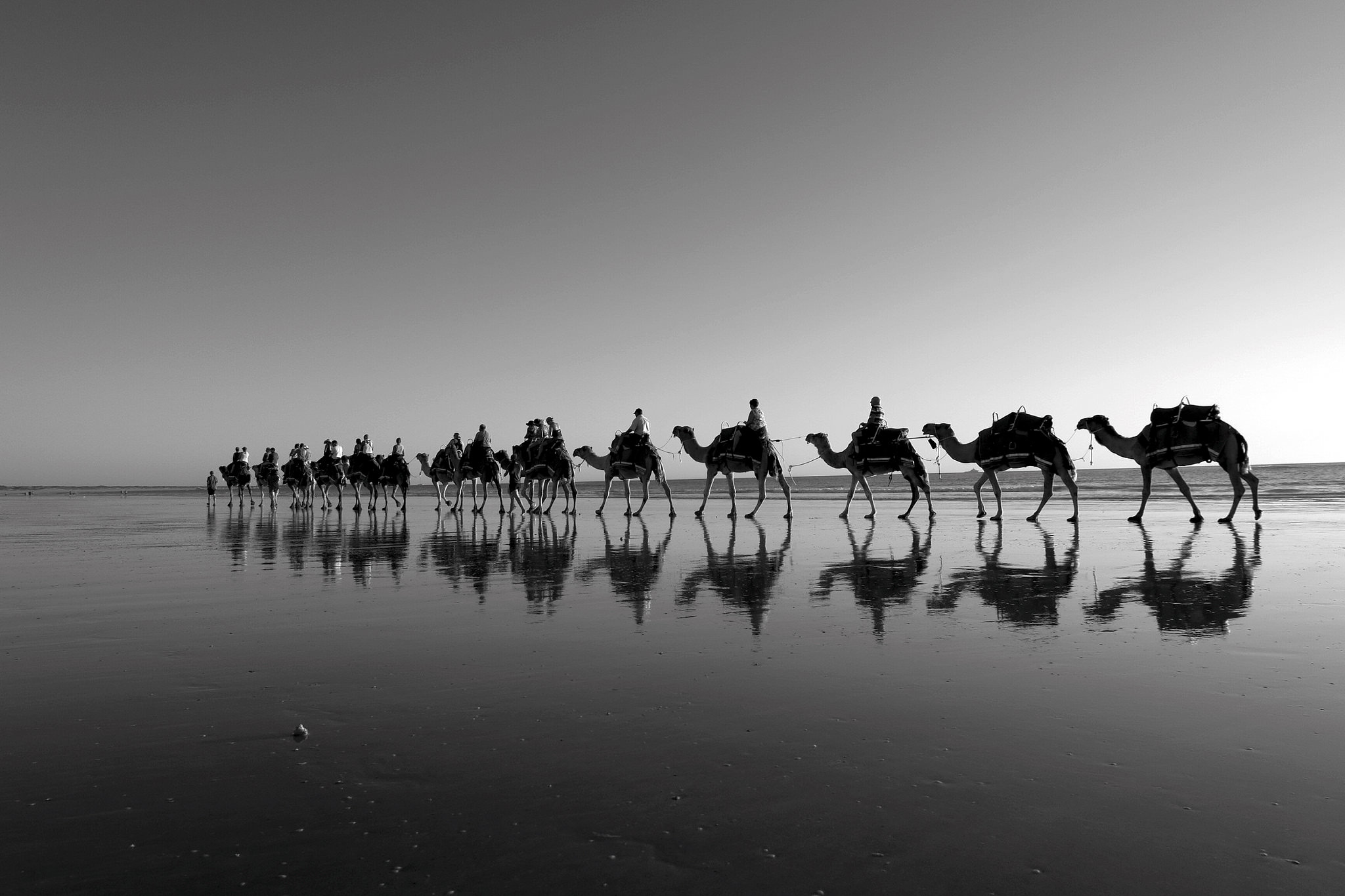 From Derby, it is about 150 km to Broome. We finally reached the West Coast! After more than 4600 kms, we crossed Australia from East to West … Broome boosts like a real city! Well, sorry, we’ve been away from the real civilized world for quite a while … For us, this feels like getting back in touch with culture, food, city life! Mind though, Broome is situated in the north-west of Australia, about 4600 kms from Brisbane, about 2300 kms form Perth (shortest route) and 4500 km from Sydney. Quite isolated 🙂 But ideally located to harvest pearls … The industry came alive when the first European settlers discovered the largest pearl shell in the world, back in the mid-19th Century. Of course, Aboriginal people knew this species a lot longer! And large shells, usually means big pearls … The Japanese were the first to cultivate the pearls, it is only since the 60’ies this proces came into the hands of an Australian man. The pearl farms were born.

We set camp in the first caravan park – with the utmost appropriate name Broome Caravan Park – along the high way. Now, there are a few things you need to know about caravan parks in Broome:

We really liked Broome! There is a lot to see, and lots of places to get a well deserved rest.

Of course you have to see Cable Beach with the world famous camel rides! It is really sad to see these animals are used for the joy of tourists. And they smell awful …We believe they only start in the afternoon, once the tide is low enough (and the tides are, just as they are in Derby, huge with about 10 meters difference between high and low tide!). That’s the same timing to get on the beach with your car. Don’t try to get on it if you don’t have a 4×4, and even then be careful not to get bogged. Find yourself a nice spot, away from the crowds (the beach is long enough with 22 kms) and enjoy the sun and the sea! Cooking on the beach at sunset is an experience we’ll never ever forget! Cable Beach lays adjacent to Minyirr Park  where you can walk several tracks through the dunes. By the way: the name of the beach derives from the fact the undersea telegraph cable which linked Australia to Java and beyond, came ashore at Cable Beach (in 1889). But Broome has a lot more to offer than Cable Beach. Try the cemetery, It is a very multicultural one, the kind every so-called democracy can learn from. Muslims, christians, Japanese, Malaysian, Aboriginal people. Everyone has their own particular corner. The Japanese (and other Asian) people were pearl divers, and extremely important to the pearl industry of Broome. Before the turn of the 18th Century, Aboriginal people used to dive for the pearls. A lot of immigrants lost their lives during the harvesting of the pearls in the deep ocean.

Streeter’s Jetty is an old wooden jetty, that disappears in the mangroves at high tide. It was once built to develop the pearl trade. Nice, but be sure to use insect-repellent. The sandflies are everywhere … Around the Jetty a lot of the buildings refer to the pearling history.

The wharf is a lovely place to watch the fishermen. On the other side of this tip of the peninsula Gantheaume Point is a place loved by backpackers looking for a free ocean-shower, but if you can avoid them, it is an absolutely lovely place! It’s a pity we didn’t get to see the dinosaur footprints here … (only viewable at low tide, at a particular rock) But we were very fortunate to be in the right place at the right time. The Staircase to the Moon is spectacular! It is a natural illusion created by the full moon and its reflection on the mud flats at (very) low tide. It only occurs between March and October.

Since we are of the adventurous kind of people, we did leave Broome for a couple of days, to discover the Dampier Peninsula. Well, we got to James Price Point! There are a lot of free camps along this part of the coast, but you have to be lucky to get a place. James Price Point on the other hand wasn’t a problem at all. We shared it with one other guy who protests against the plans of offshore gas exploitation, which would spoil this beautiful part of Australia, and disturb one of the main whale migration routes. Be aware though, this route is not for unexperienced drivers, nor for 2WD!